A Path to Success After Aging Out of Foster Care

A Path to Success After Aging Out of Foster Care

Each year there are 20,000+ youths aging out of foster care programs across the nation. Many have no significant safety net or family to support them during their transition to young adulthood. As a result, they face great difficulty in gaining steady employment. Only 71% of youth in foster care will receive a high school diploma by age 19. And only 10% will attend college – lowering career prospects.

To help foster youth develop independence and self-sufficiency skills, PRIDE Industries offers employment services such as job search help and training programs for  young adults in, and aging out of, the foster care system. PRIDE’s Youth Services and Internship Programs provide support and guidance to teens while connecting them to internships and jobs in the community. This success is made possible by generous donations to the PRIDE Industries Foundation.

With the determination to build a foundation of independence, Phoenix, a 16-year old in foster care, enrolled in PRIDE’s Youth Services Program in December 2016. She has graciously shared her story with us.

Seeking a Job to Prepare for Aging Out: Phoenix’s Story 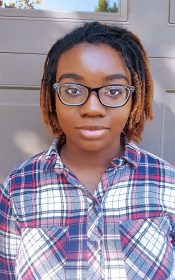 Phoenix will be aging out of foster care soon, and her future is looking bright. Currently a senior in high school, she maintains a 3.5 GPA, is taking Advanced Placement (AP) classes and is excited about attending college next year in the fall. Phoenix has overcome many obstacles in her life as a youth in foster care. These include adjusting to a new city, school and family. With purpose and drive, she maintains a positive attitude and continues to thrive.

After Phoenix celebrated her 16th birthday, she soon realized she would be reaching a serious milestone. “In two years, I am going to be financially on my own,” says Phoenix. “I needed to get a job to start saving for my future.” However, getting that first job was more difficult than she had anticipated; lack of a car and reliable transportation, a phone and prior job experience all presented challenges. When Phoenix was first invited to participate in an interview, she did not know how to navigate difficult questions.

Fortunately, Phoenix’s foster mother referred her to PRIDE Industries’ Youth Services Program, which connected her with Job Developer Danielle Anderson. Together, they worked to create a resume and cover letter. Phoenix practiced interviewing with multiple PRIDE Job Developers and worked on her posture, speaking tone and eye contact. Practice soon made perfect, and Phoenix’s confidence increased.

Aside from guidance from PRIDE’s staff, the Foundation provided Phoenix with a cell phone, interview clothing, and other essential items.

The job search was not an easy one. “Not hearing back after applying was very frustrating,” says Phoenix. “As a minor, my job options were already limited.” Despite the long process, Phoenix persistently applied and followed up with every opportunity that she could find. After a few months, she called to inquire about opportunities at a local restaurant and landed an interview. With the new skills that she had learned, Phoenix was hired on the spot as a store associate/cashier in June 2017.

“The Youth Services team was so proud of Phoenix for reaching her goal,” says Danielle. “The skills that she learned including customer service, teamwork and balancing multiple priorities, will help her in future career pursuits.” Having a job not only provided a paycheck, but it has also improved Phoenix’s self-confidence. “I was able to purchase my first smartphone and started saving for college,” says Phoenix. With the experience gained from her first position, Phoenix applied again to a department store. She is now working as a cashier in an environment that she enjoys.

After she graduates from high school in spring 2018, Phoenix plans to study psychology and become a therapist, focusing on adolescents. “The guidance I received from Danielle and PRIDE’s Youth Services team will continue to help me when I attend college and build a career,” says Phoenix.

PRIDE Industries’ employment programs include coaching, mentoring, internships, and a variety of job services to help foster youth prepare for aging out or find success after they have already left the system.
Learn More

“Coming from foster care, I often felt uncomfortable when asked questions about my personal life and background,” says Phoenix. “I didn’t feel like I had the answers that they wanted.”

Our Stories The Power of a Support Team

In the News PRIDE Industries Launches Free Helpline During NDEAM