Mario Muniz is an employee at PRIDE’s Ft. Bliss, TX Integrated Facilities Management contract. A veteran with a disability, Mario struggled to find work after being laid off during his transition to civilian life. With the help of PRIDE Industries’ employment veterans programs, Mario was soon able to start a fulfilling new job at a military base, where he has the opportunity to help others like himself.

Mario served in the U.S. Army from 1971 to 1973 as a Staff Sergeant, including a tour in South Vietnam. He concurrently served in the Texas National Guard from 1973 to 1990. As a result of his service, Mario developed multiple disabilities, including major depressive disorder, bilateral sensorineural hearing loss, personality disorder and left lower extremity radiculopathy (mechanical compression of a nerve root).

“Mario has overcome many obstacles related to his disabilities, including emotional control issues that became more difficult to manage after his military service,” said PRIDE Vocational Rehabilitation Counselor Corina Huerta. “He felt frustrated since he could not thoroughly explain his challenges to others, including his family. Counseling from the Veterans Administration (VA) proved helpful in addressing these issues.”

Even so, like many veterans, Mario experienced difficulty applying military skills to civilian jobs. Facing unemployment for almost a year, he earned a certificate from the Texas Workforce Commission in Construction Management. Despite his best efforts, finding a job still proved elusive. This all changed when a friend at his church referred him to PRIDE Industries’ employment program. PRIDE offers a range of services, such as vocational training and job placement assistance, for veterans with disabilities or other barriers to employment.

“Connecting with PRIDE was such a positive experience,” said Mario. “AbilityOne Recruiter Cynthia Baca truly went above and beyond to help me, especially when I was going through such difficult times.” In December 2011, Mario was hired as a Maintenance Trades Helper with the Facilities East Department.

To help support him in his job, Mario has been provided with many accommodations including vocational rehabilitation counselors that are trained in assisting veterans, lifting, and physical restrictions, and additional breaks as needed. 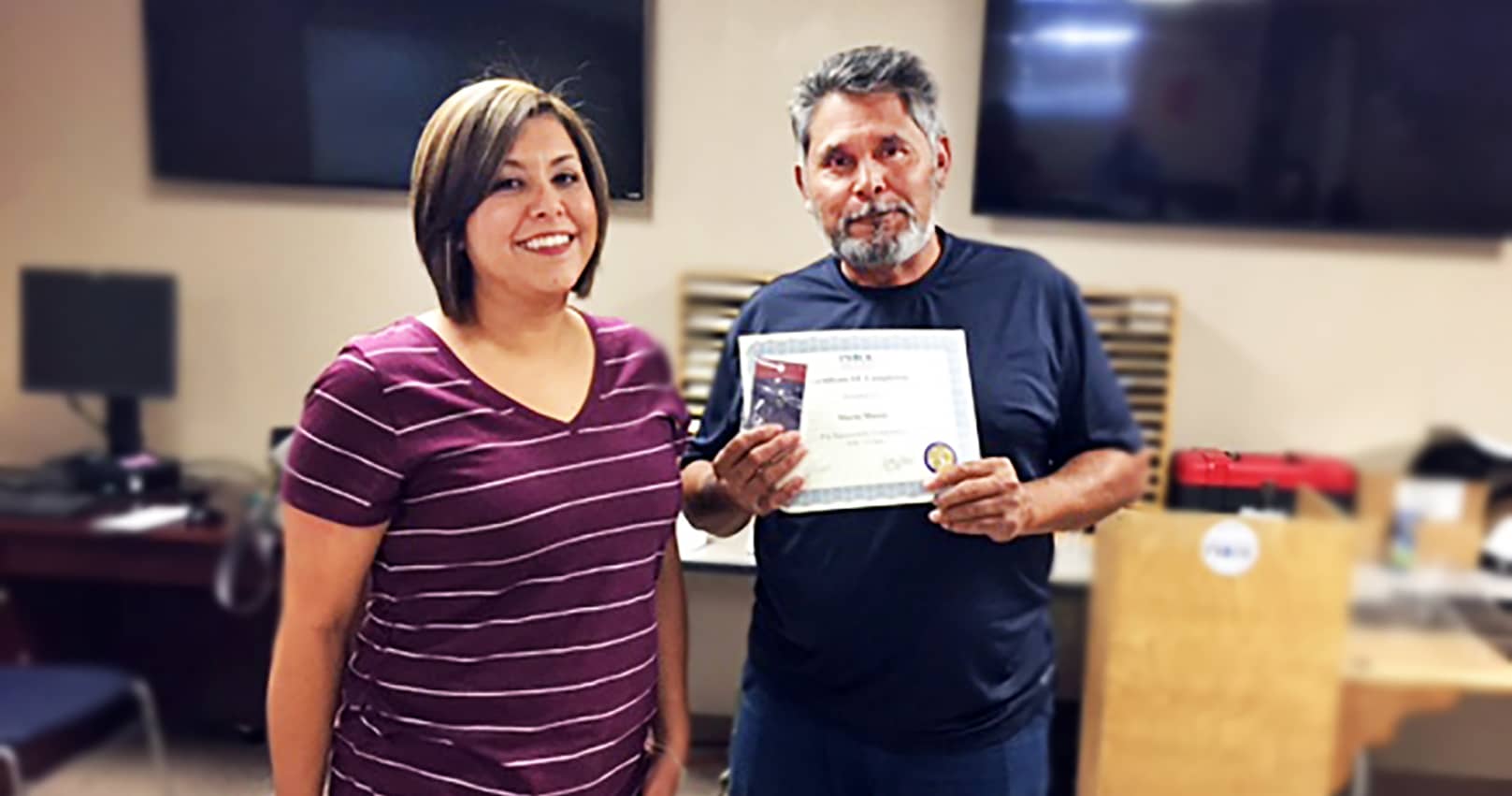 Finding Fulfillment in Helping Other Veterans

Through his hard work and his impressive skill set, Mario earned two promotions within the first year of his hire. He quickly moved on to General Maintenance Worker and Carpenter. Now he serves on the Carpentry Department Employee Advisory Committee.

“Working on the familiar environment of a military base was beneficial in helping me connect with my new career,” said Mario. “My favorite moment was working in the ‘You Do It’ shop, where I helped military service members complete woodcraft projects. I saw it as an opportunity to help fellow veterans keep their minds away from psychological stressors. It is a wonderful feeling to help them feel welcome at work.”

Mario now contributes to PRIDE’s inclusive and supportive environment by training and mentoring new employees, including many with disabilities. Mario desired to communicate better with his colleagues that are Deaf and/or hard-of-hearing. To that end, Mario participated in an after-work American Sign Language (ASL) class offered by PRIDE’s Job Coaches.

“Not only does my job give me the opportunity to feel productive, but also to raise morale for service members,” said Mario. “Joining the military is not an easy lifestyle; it can often feel lonely and difficult, especially when you are away from home and missing your family. ” Mario also gives back beyond his job, hosting service members during the holidays and actively volunteering in his church.

“Mario continues to feel appreciated by the positive feedback received and friendships made with our military customers,” said Corina Huerta. “It’s been wonderful seeing him overcome obstacles and grow in his role.”

PRIDE Industries’ veterans programs are available to those looking for an easier transition into civilian jobs. Whether we place you into a base or help match your skills to another job, you can find fulfilling employment with PRIDE employment services.
Explore Services

“Connecting with PRIDE was such a positive experience. AbilityOne Recruiter Cynthia Baca truly went above and beyond to help me, especially when I was going through such difficult times.”