A Continuing Connection to the Military – Veronica’s Story

A Continuing Connection to the Military – Veronica’s Story

After graduating high school in sourthern Michigan, Veronica Arquette moved out and found a job at a record store. She felt it was an amazing experience, but eventually, she wanted to do something different with her life.

To embark on a new adventure, Veronica Arquette joined the U.S. Air Force in May 2001 as a young adult, enlisting as a Security Forces member (the Air Force military police). After attending basic training at Lackland AFB in San Antonio, TX, she deployed to Okinawa, Japan, as part of the 18th Security Forces Squadron.

“Living in Japan was an adjustment at first, but it was wonderful getting to learn about Okinawan and Japanese culture. I also got the chance to meet people from many different countries.”

“After four years of serving abroad in 2005, I decided to end my service as an E-4 Senior Airman because there were no options to advance. I returned home to Michigan to decide my future, and after a short decision period, I decided to enlist again.”

In 2007, Veronica joined the U.S. Army as a Human Resources Specialist, managing awards, vacation, and pay for the soldiers. She deployed to a variety of countries including Cuba, South Korea, and Afghanistan. “Afghanistan was an intense experience – I had been recently promoted to Sergeant and was responsible for moving soldiers to different bases across the country. During these 14 months, we all had to concentrate on keeping safe together daily.”

“The highlight of my service is when I returned home in 2011 from Afghanistan to Ft. Campbell, KY. It felt incredible getting off the plane and seeing my mom, dad, and sister, knowing I had made it safely home to them.”

Two years later in 2013, Veronica retired from the military as an E-6 Staff Sergeant due to Snapping Scapula Syndrome, which affects the back and shoulders. “I acquired this disability from carrying too much weight while deployed; it unfortunately still often affects my day to day activities.”

“My following transition to civilian life was hard. Since my husband (who I had met in the Army) is still on active duty, I had to start the job hunt all over again. Finding a good job is a challenge since competition is fierce around military bases, especially among military spouses who also had to relocate. I have the most supportive husband, but it was still a difficult time for me.”

Fortunately, Veronica joined PRIDE’s Ft. Polk contract in 2017 as a Human Resources Assistant after moving there in 2016. “I knew that it was going to be a challenge to find a job position in such a rural area; due to my experience, employers often told me that I was overqualified. However, PRIDE Industries gave me a chance that I never thought I would get.”

“Today, nothing brings me more joy than my husband, dogs, and helping the employees at PRIDE Industries; it feels like an extension of my military service.” As a retired soldier, Veronica is expertly able to navigate through military protocols and help other veteran employees and those with disabilities, including with procedures such as family medical leave act (FMLA), payroll and direct deposit, and medical plans.

“Even though I am now working as a civilian, I enjoy being connected to the military. I appreciate the opportunity more than words can say.”

“My advice for any veteran that is experiencing troubles with transitioning is not to give up! You often can feel stuck adjusting to a new career and lifestyle, but there are so many resources and other veterans who will reach out and help you.”

Are you a veteran? 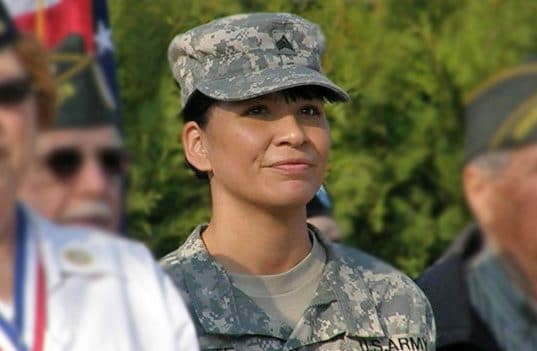 “My advice for any veteran that is experiencing troubles with transitioning is not to give up! ”

Our Stories Centuries of Service: The US Army Celebrates Its Birthday

Our Stories Saluting Those Who Serve: Frank Goehringer